If you live in the central or southern United States right now, you’re witnessing perhaps the biggest cold front and related fall migration event of the season.  With snow up north and a steady stream of northerly winds during the night, everything that can’t survive freezing winters has been heading south lately. 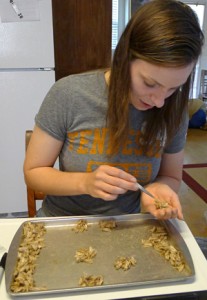 Predicting migratory animal movement is more of an art than a science at this point.  However, based on my own research I know that noctuid moth numbers go up significantly after cold front passage, and the bats are significantly heavier directly after a cold front in Texas.  Here’s a photo of my field assistant from last year, Rachel Miller, counting Corn Earworm moths (Helicoverpa zea) caught in a pheromone trap.  Some animals move directly with the front, but most activity happens over the following nights, when winds shift to come from the north, making the southward journey much easier for bat and moth alike.

Tools like the weather map above and NEXRAD radar displays can tell you when and where to look, if you know how to read them.  The map above shows a cold front passage (the blue lines with triangles aiming south) advancing over my Texas field site about this time last year.  I had to teach myself enough meteorology to interpret the NOAA weather charts, which is important if you want to be able to predict migration events.

Scientists are making good progress in understanding how to track bat (and bird) emergences from roosts using NEXRAD radar.  But this technology hasn’t really been applied to tracking bat and insect migratory activity — yet.  I’d love to get a chance to work on that.