Last fall I attended a week-long course from the Smithsonian-Mason School of Conservation on Effective Conservation Leadership.  With nine other conservation biologists from around the world I learned skills like conflict resolution, planning and decision making, and heard presentations by conservation leaders including Tom Lovejoy, Marshall Jones, Lee Talbot, and Robyn Dalzen.  The course was very interactive and it was fun to role-play scenarios involving conflicting stakeholder negotiations.  Unfortunately I was sick and could not participate in the off-site ropes course.  After hearing about conservation efforts by my classmates from Peru, Nepal, Zambia, and Laos I’m excited to hear about their future success.  I’m hoping we’ll have a class reunion, ideally near the tigers in Chitwan national park in Nepal!

We also got a behind-the-scenes tour of the endangered species breeding program, including Przewalski’s horses, scimitar-horned oryx, cheetahs, and maned wolves (pictured below) among many others.  The most valuable part of the course for me was a different kind of behind-the-scenes glimpse: learning about various biodiversity projects from course leader Francisco Dallmeier in partnership with natural resources exploration in the Amazon basin.  At first it was difficult to believe that joining forces with companies doing oil exploration was the right thing to do, but after hearing about the process and the hard-won victories 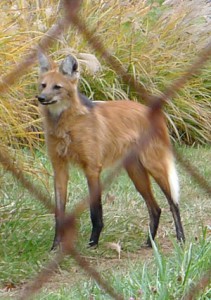 I had to agree that partnering with what conservation biologists think of as the “bad guys” was necessary.  As with everything in life, under close examination, what was once black and white turns into a far more complex situation.  And that appears to be a pretty good metaphor for conservation biology overall.

Whenever I meet conservation biology leaders I usually ask one question: how can you keep doing this in the face of so much loss?  The answer is always something along the lines of “well, you could either spend all your time at the bar, or just try to do what you can.”  As I get closer to finishing my degree and joining the ranks of biologists doing what they can, I’m starting to be able to see the glass as half-full instead of mostly-empty.  Here’s to giving it my best!