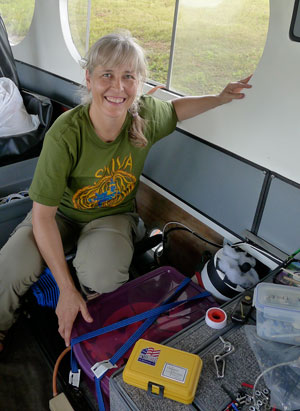 In addition to setting up the insect sampling equipment and protocol, I also installed a bat detector to look for high-flying bats feeding on those high-flying insects along the way.  Here you can see a photo of me next to the box containing the equipment.  While I have successfully recorded bat echolocation calls at high altitudes before using a Helikite, I don’t think anyone has ever attempted to sample bat calls from an airship.  So I had to invent ways to set up and deploy the equipment, altering the design along the way as necessary.

I used a standard SM2Bat+ detector from Wildlife Acoustics with a 50 meter long cable for the microphone.  I tested both 50 and 100 meter cables to estimate ultrasonic interference from the airship engines.  Even at 100 meters, the airship engines at full throttle generated so much ultrasonic noise that any bat calls would be overwhelmed.  The good news is, this means that no bats will approach the ship and possibly be injured when the engines are working hard, since they will be effectively blinded by all that noise.  The bad news is that I won’t be able to record bats if the ship is climbing, flying at higher speeds, or into stiff winds.  However, at regular cruising speeds the engines were quiet enough that I was able to just use the 50 meter cable.  The ship will fly with minimal engine throttle during bat sampling periods.

In order to minimize wind noise, I used the same styrofoam cover from my kite experiment, with an arrow shaft taped to the cover to help it orient into the wind. In addition, I used 65 lb test fishing line to help keep weight off the microphone cable, and attached some fishing weights at the end of the line to help the microphone drop quickly below engine level for safety purposes.  Deployment simply entails lowering the microphone assembly out of one of the open windows and turning on the detector!

During the test flight, the detector mostly just flew below the ship, with the microphone pointed downward, so I’m not sure what wind noise protection the styrofoam casing will offer, if any.  In this photo you can see the shadow of the airship on the water, and the white dot in the lower left corner is the microphone hanging 100 meters below the ship.  Fingers crossed that this will work!

You can see more photos from the set-up trip here.

What if the BBC decided to do a show about your dissertation research?
Next Post: cloud lab photos on flickr