I’m just back from a visit to China for meetings about using radar to study animal movement at high altitudes, or radar aeroecology. It was so great to hang out with old friends and meet new ones, learn about what others are working on, and eat some fabulous food. 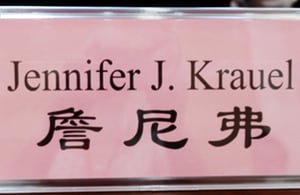 The primary meeting was the second international Radar Aeroecology meeting in Zhengzhou, Henan. This was the second meeting, after the first in Rome in 2017. However, there were workshops both before and after the main meeting and many attendees were at both workshops. We started off in Nanjing at the Nanjing Agricultural University where speakers from the radar entomology group as well as visiting researchers presented their research. The next day we all took the excellent fast train to Zhengzhou where we arrived just in time for the opening ceremonies of the main meeting. There were speeches from all the local sponsors, and Alastair Drake and Don Reynolds received lifetime achievement awards. Most visiting scientists had seats labeled with our names translated into Chinese. It was all super fun.

The main meeting in Zhengzhou

The main meeting covered two full days, and included presentations from almost all the important researchers working in the field of radar aeroecology. We heard about different kinds of radar, and applications of the technology to different problems such as understanding threats to migratory animals from light pollution. Cecilia Nilsson was able to cover the talks on Twitter (I didn’t have cell phone access) so you can read her summaries of the first and second days. I presented a review of radar validation techniques, highlighting our recent project in Texas. While we were there, Adriaan Dokter’s paper came out in Science documenting serious declines in North American bird populations over time, so we got to hear the details of how he used weather radar in this new research.

After the main meeting, many of us had a day off for excursions. I went to the Shaolin Temple where I had an exciting adventure after being separated from the main tour group. Finally, we took the train to Beijing for the last workshop at the Beijing Institute of Technology. Then it was time for the closing banquet, this time at a fancy restaurant with a floor show, and then to say our goodbyes until next time.

For another perspective, here’s my friend Silke Bauer’s blog post about the meetings for the GloBAM site.

Below are some of my photographs from the trip, including from my visit to the Shaolin Temple near Zhengzhou. As you can see, we spent a lot of happy time eating! You can also see the photos directly on Flickr.